The Polymethyl Methacrylate Market is forecast to reach US$6.1 billion by 2027, after growing at a CAGR of 5.1% during the forecast period 2022-2027. Polymethyl methacrylate (PMMA) is a synthetic polymer that can be categorized into various types which include extruded sheets, granules, pellets, acrylic beads, and more. According to the German Association of the Automotive Industry (VDA), the global expenditure rose to US$ 51.5 billion in 2020, out of which the German automotive industry accounts for more than one-third of total global R&D expenditure in the automotive sector. An increase in demand from the automotive, and building & construction industries acts as the major driver for the market. On the other hand, factors limiting the use of polymethyl methacrylate on applications requiring high rigidity may act as a major constraint for the market.

There is no doubt that the COVID-19 lockdown has significantly reduced automotive, and production activities as a result of the country-wise shutdown of automotive sites, shortage of labor, and the decline of supply and demand chain all over the world, thus, affecting the market. Studies show that the outbreak of COVID-19 sharply declined the production of automotive in 2020 due to a lack of operations across multiple countries around the world. According to OICA (International Organization of Motor Vehicle Manufacturers), the production of automobiles decreased by 16% globally in the year 2020, compared to 2019. However, a slow recovery in the automotive industry has been witnessed across many countries around the world since 2021. For instance, recent insights from OICA states that the total automobile production in 2021 in Europe, America, Asia, and Africa increased by 25%, 17%, 28%, and 37% respectively in comparison to 2020.

In this way, a slow and steady increase in automotive production activities is expected to increase the demand for polymethyl methacrylate since PMMA extruded sheets are primarily used in windows of a vehicle, motorcycle windshields, interior and exterior panels, instrument covers, fenders, spoilers, and other automobile ancillaries. This indicates a slow and steady recovery of the market in the upcoming years. 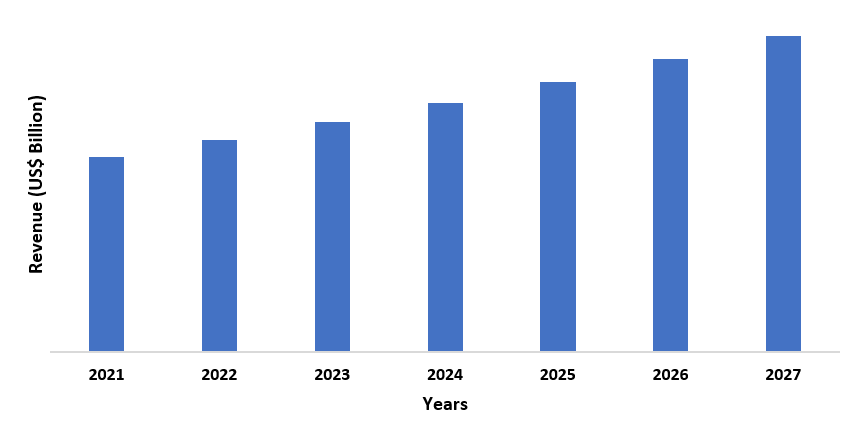 The automotive application held the largest share in the Polymethyl Methacrylate Market in 2021 and is expected to grow at a CAGR of 5.4% between 2022 and 2027, owing to the properties of PMMA that is driving its demand in the automotive sectors across the globe. PMMA is a fully recyclable and eco-friendly material. It has high resistance to UV light and shows the greatest surface hardness, in comparison to other thermoplastics. Hence, it is attaining popularity in the automotive industry. For instance, recent insights from the European Automobile Manufacturers' Association (ACEA) states that total passenger car production during the fourth quarter of 2020 reached around 34 million in Asia-Pacific, 14 million in Europe, 1.3 million in the Middle East/Africa, 1.7 million in South America, and 9.6 million in North America respectively. This, in turn, increased the demand for polymethyl methacrylate extruded sheets, granules, pellets, and acrylic beads. Hence, such new automotive production is expected to drive the market growth during the forecast period.

The Asia Pacific held the largest share in the Polymethyl Methacrylate Market in 2021 up to 28%. The consumption of polymethyl methacrylate is particularly high in this region due to its increasing demand from the automotive sector. For instance, a recent study published by the OICA (International Organization of Motor Vehicle Manufacturers) during the fourth quarter of 2020 states that around 25 million, 3.5 million, 8 million, and 3.4 million units of vehicles were produced in China, South Korea, Japan, and India, respectively, which in turn, contributed to approx. 50% of the global automobile production during the year 2020. Likewise, according to the Department of Promotion Industry and Internal Trade (DPIIT), the Indian Automobiles market invested around US$ 24.5 million worth of FDI (Foreign Direct Investment) during the year June 2020. Hence, such an increase in demand for the production of automotive is expected to increase the demand for polymethyl methacrylate extruded sheets for use in automotive components. This is most likely to boost the growth of the Polymethyl Methacrylate Market during the forecast period.

According to a recent study published by the German Association of Automotive Industry during the fourth quarter of 2020, the new registration of motor vehicles reached up to 16,763 units in Europe, 37,467 units in Asia, 3080 units in South America, 17,421 units in North America, 12,733 units in Western Europe, and 5180 units in other regions worldwide. Likewise, according to the European Automobile Manufacturers Association (ACEA), the EU demand for new passenger cars significantly increased by 25.2% from January-June 2021, and reached around 5.4 million units in total. Hence, an increase in demand and production of motor vehicles will also increase the demand for polymethyl methacrylate extruded sheets for use in automotive parts and components. This is most likely to drive the growth of the market in the upcoming years.

Construction activities are considered to be the pillar of growth for a country and also play a major role in increasing the overall global economy. Since 2019, countries like China and India have come up with multiple construction projects. For instance, the Indian government has also invested in another construction project for building Gujarat International Finance Tec-City which is undergoing development in 2021. The project is valued at a total cost of US$20 billion and is expected to cover a construction area of around 8.5 million square meters which will include 200 skyscrapers. The project also includes the construction of buildings and towers for the powerhouse. Moreover, the government of China approved 26 infrastructure projects with an estimated total investment of 981.7 billion yuan (US$ 142 billion) in 2019. Other countries like Bangladesh also have two ongoing power plant projects estimated at US$17.65 billion in total which is due delivery by 2025. Furthermore, in 2020, the US announced the commencement of the Second Avenue Subway Construction Project worth US$ 17 billion in New York City which is still undergoing development in 2021. Likewise, Egypt also announced the commencement of the Skywalk Mixed-use Project worth US$ 513 million in 2020 which is scheduled to be delivered by 2026. This 800-unit project includes the construction of offices, commercial units along with a 5-star-hotel.

Polymethyl methacrylate (PMMA) has numerous limitations such as poor impact resistance, limited heat resistance (80°C), and poor resistance to wear and abrasion. Moreover, it has limited chemical resistance which makes it susceptible to attack by organic solvents. Furthermore, it is relatively brittle in comparison to other transparent thermoplastic and is likely to crack under load. All of these factors limit the use of PMMA for applications that require high rigidity. Hence, such limiting factors of polymethyl methacrylate may confine the market growth.