Flight Simulator Market is forecast to reach $7.8 billion by 2025, at a CAGR of 5.20% during 2020-2025. Increasing demand for virtual flight environment for both commercial and military purposes and growing need for cost effective pilots training are expected to accelerate the Flight Simulator market during forecast period. Similarly, rising spending in aerospace training sectors are creating opportunity for flight simulator market. For instance, a Canadian company CAE, which is engaged in training for the civil aviation proposed to invest $288.75 million for the development and training activities. These kind of investments are likely to bring demand for flight Simulator market. 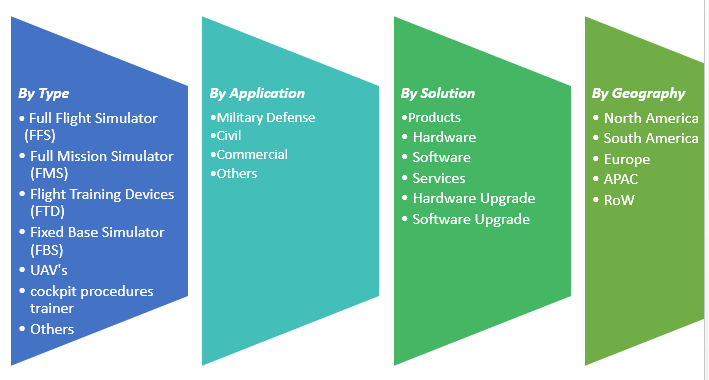 Flight simulator for Commercial application is likely to register a CAGR of 7.32% during forecast period. Rise in the global air passenger traffic is driving the growth of the aviation industry, which is leading to the demand for commercial aircraft deliveries. For Instance, Bell’s Textron Inc. delivered 192 commercial aircrafts in 2018 as compared to 132 in 2017. Similarly, in 2017, Honeywell Inc.  Forecasted to deliver 4000 to 4200 civilian aircrafts between 2018-2022. Rising demand in commercial aircrafts will create opportunity for Flight Simulators.

In 2018, North America dominated the Flight Simulator industry market size for about 35.67% market share, followed by APAC and Europe. In North America, strict guidelines imposed by the Federal Aviation Administration (FAA) and Federal Aviation Regulations (FARs) regarding use of simulators for training purpose. According to new FAR regulations, Air carriers must compulsory develop training programs using simulators that meet the upgraded requirements. Stringent regulations as such will drive the usage of Flight Simulator market in this region. Similarly high demand for air travel in North America is also one of the major reason for flight simulator market as it increases the need for pilot training. For instance according to the report given by International Air Transport Association (IATA), in 2018, global passenger traffic in North America increased by 6.5% between 2017-18.  Increased demand for passenger traffic will create opportunities for new aircrafts there by creating demand for flight simulators.

As Flight simulators are used to train the pilots by creating the virtual environment, increasing demand for new pilots will in turn rise the flight simulator market share globally. For instance, demand for new pilots is expected to rise dramatically over the next two decades as a result of new aircraft entering the global fleet. According Boeing, 790,000 new pilots is likely to be required by 2037 to meet growing passenger fleet. Similarly, in 2018, Airbus estimated a worldwide demand of pilots to reach 450,000 by 2035.

·         Increase in adoption of Virtual Training to ensure safety

The Increase in adoption of technology of virtual training and simulation in civil and commercial aviation to ensure aviation safety in flight handling and including situation such as awareness, skill competency will promote the flight simulation market. Similarly, research and development efforts directed towards virtual reality and artificial intelligence advancements has resulted in highly naturalistic flight simulators, thus offering navigation and motion control mechanism will enhance the market positively.

·         High cost involved in the making of flight simulator and complexities in acquiring License.

One of the prominent challenges is the high cost of producing and acquiring FFS FTD systems and cockpit procedures trainer. For instance FAA Qualified Level  6& 7 FTD aka fixed base simulators, cost around $2 million and FNPT II, Flight and Navigation Procedures Trainer, costs about $2.5 million. Similarly complexities  in acquiring the license is also one of the challenging factor in flight simulator market. Majority of training providers would not be able to acquire and operate the type of simulators required for a major portion of multi-crew pilot license (MPL) training due to their cost and slow pace regulatory licensing process.