Polymer Microinjection Moulding Market size is forecast to reach $1.8 billion by 2026, after growing at a CAGR of 12.1% during 2021-2026. Growing demand for small-sized components, mainly from the medical industry, is the key driving factor for market growth. Microinjection moulding is used for the manufacture of highly valued micro medical components such as sensors, implants, tubes, catheter tips, and micro-optics, and so on, the increasing demand for these has had a positive impact on the market growth. Microinjection moulding using polymeric materials such as polyoxymethylene, polyethylene, polylactic acid, polysulfone, and so on, has the characteristic to play a key role in the near future in supporting the growing demand for miniaturization components for biomedical, optical, and IT technology applications. These polymeric materials offer benefits such as the ability of low cost and short cycle times process, useful for mass production, the increased capacity to achieve high aspect ratio components and micro dimensions with high manufacturing tolerances, the ability to process polymers with a wide range of properties according to the required functionality. Therefore owning to the aforementioned factors polymer microinjection molding demand is increasing.

Every aspect of life has been affected globally by the COVID-19 pandemic. The pandemic affected all segments of the market, along with disruption of the supply chain, demands & trends, and financial difficulties. The polymer microinjection molding industry is facing issues such as delays in receiving raw materials from suppliers due to the restriction on import and export of commodities. In addition, the pandemic has affected the operations of various industries such as automotive, aerospace, electronics, and so on, which is directly affecting polymer microinjection molding market growth. For instance, as a result of the COVID-19 crisis, the closure of the automotive manufacturing plant resulted in a production loss of 1,465,415 motor vehicles in April 2020, according to the European Automobile Manufacturers' Association. According to the Welsh Government services and information, global demand for the production of short-haul sized aircraft is likely to drop by 15%  and by 30%  to 65% for long haul sized craft, by the end of 2025, i.e., around 600 to 1,300 fewer aircraft out of 2,000. Therefore, these factors are limiting polymer microinjection molding market growth. 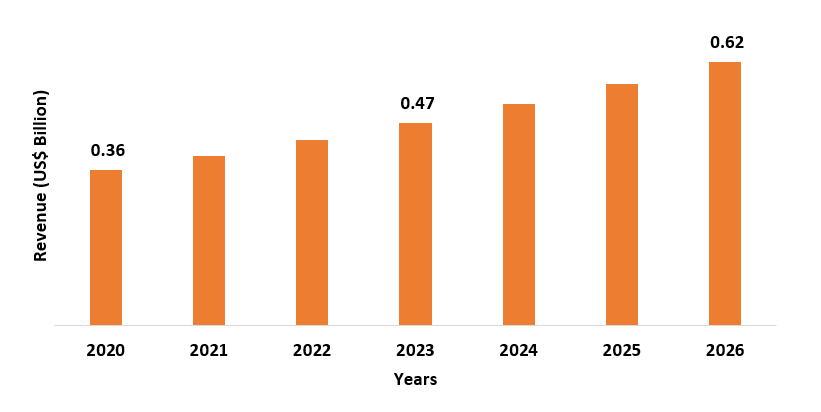 For more details on this report - Request for Sample
Polymer Microinjection Molding Market Segment Analysis - By End Use Industry
The medical and healthcare industry held the largest share in the polymer microinjection moldings market in 2020 and is growing at a CAGR of 12.8% during the forecast period. Growing demand for small components due to an increasing number of minimally invasive surgeries is complementing market growth. In addition, medical and healthcare industry is expected to continue to dominate over the forecast period due to increasing government concern towards healthcare in various regions. According to the India Brand Equity Foundation, the Indian healthcare market can increase three-fold to Rs 8.6 trillion ($ 133.44 billion) by 2022. In addition, medical components and devices manufactured with medical injection molding using durable, reliable medical grade plastic materials and complying with FDA regulations are becoming more popular. Therefore, owning to the aforementioned factors polymer microinjection moldings, the demand is increasing in medical and healthcare industry.

North America held the largest regional share in the polymer microinjection moldings market in 2020 up to 40%, owing to increasing healthcare expenditure in the region. According to Select USA, the United States remained the largest medical device market in the world with 40% ($156 billion) of the global medical device market in 2017. And by 2023, the United States medical device market is anticipated to rise to $208 billion. Polymer microinjection molding such as polyoxymethylene, polyethylene, and polylactic acid are widely used in the automotive industry for the production of connectors, gears, and micro switches. The demand for these machines is very high in the region and is expected to follow a similar trend in the coming years. In recent years, it is expected that the increasing production and assembly bases for automotive, aerospace components and the growth of the electronics industry in the Asia-Pacific regions will provide scope for the use of polymer microinjection mouldings. According to International Trade Administration, Chinese automobile output is expected to reach 35 million units by 2025. According to the Electronic Industries Association of India, the total production of the electronics sector in India was Rs 387,525 crore in 2017-18, compared to Rs 317,331 crore in 2016-17, exhibiting a growth of about 22%. Moreover, India's consumer electronics and appliances industry is expected to become the world's fifth-largest by 2025. India could create an $800 billion to $1 trillion digital economy by 2025, and India's digital economy could fuel 18-23 percent of overall economic activity by 2025. Thus, further expected to create opportunities for polymer microinjection mouldings market in the coming years.

The key driving factor for the market is the increasing demand for small-sized components, mainly from the medical industry. The use of micro moulding in the medical industry has been prompted by a shift in the trend towards replacing phthalate-containing polymers such as PVC with thermoplastics coupled with increased demand for micro materials. For the manufacture of ear implants, micro filters, precision blades, bearing caps, and certain other devices requiring precise features and geometries, micro moulded parts are largely used. According to Invest India, the medical device sector is likely to reach $65 billion industry by 2024. India’s expected export of medical devices to reach approximately $10 billion by 2025. According to the Ministry of Health, Labour and Welfare Annual Pharmaceutical Production Statistics, the Japanese market for medical devices and materials in 2018 was $29.3 billion, i.e., 6.9% up from 2017. And the market is expected to grow at a CAGR of 4.5% from 2018 to 2023.  This growth is expected to influence polymer microinjection mouldings market growth.

Advantageous Benefits of Micromolding over Micromachining

Microinjection moulding provides various benefits over micromachining. Compared to micro machining that uses stainless steel and results in increased cost-effectiveness, micro injection moulding takes relatively less time to mold the components and uses low-priced feedstock such as polyether ether ketone, polyoxymethylene, polyethene, polylactic acid, and polysulfone. Micromachine, on the other hand, usually requires high-cost raw materials, such as ceramic and metallic materials, which lead to high production costs. Therefore, the trend is shifting towards micro-moulding over micromachining, owing to its cost-efficiency. In addition, the development of micro-optics and microfluidics technologies is also playing a major role in the market growth.

The design of the microinjection moulding process involves the determination of a number of processing parameters such as pressure, time, clamping force, speed of injection, stroke of injection, and so on. In such process, the irregular geometry of the microscale and the complex thermo-mechanical may affect the injection moulding cycle, therefore, it is necessary to properly simulate the moulding process to develop and predict the final configuration of the moulded part. Hence, one of the main challenges related to micro injection moulding technology is the ability to simulate the process. Additionally, the lack of awareness of micro moulding and its high costs in developing regions is expected to act as a major constraint in the growth of the global polymer micro-injection moulding market.