Polysiloxane Market is forecast to reach $1.97 billion by 2025, after growing at a CAGR of 4.5% during 2020-2025. Polysiloxane, also known as silicon polymer is an inorganic polymer that does not include carbon atoms in the backbone. Inorganic silicon-based polymers are inherently resistant to temperature, ultraviolet light and oxidation and are used as coating binders in polymer coatings.  The market for polysiloxane is driven by several factors, such as increasing the use of protective and industrial coatings, vast applications in the healthcare industry, and augmenting usage in optoelectronic applications. The report covers Polysiloxane Market size by type and applications, Polysiloxane Market share by top 5 companies and also the market share by start-ups during the forecast period. 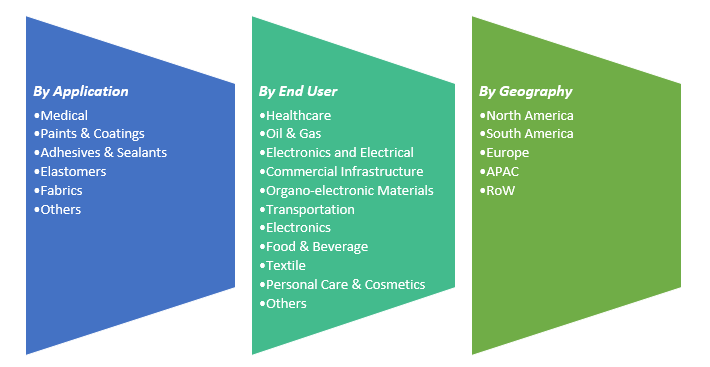 Paints & Coatings segment held the largest share of the polysiloxane market in 2019. Owing to their unique chemistry and robust chemical structure, which results in superior long-term color retention, glossy effect, resistance against chalking, fading, and corrosion, polysiloxane paints, and coatings have been prominent among other coating materials and are increasingly favored as viable protective and industrial coating solutions. They are being used in various applications, including industrial, military, recreational, and other infrastructure applications, such as roller coasters, marine vessels, water tanks, oil platforms, bridges, smokestacks, and others. As these industrial applications are expected to continue to grow, the market is also expected to grow during the forecast period.

Asia Pacific dominated the polysiloxane market with a share of more than 36% during the forecast period. In various countries such as China and India, high investments are being made for industrial growth and development. Owing to its large production base of adhesives & sealants, medical devices, electronics and elastomers, China dominated the Asia-Pacific segment. The growth in various end-user industries, continuous investments, and support from the regional governments are expected to drive the Asia-Pacific segment of the polysiloxane market during the forecast period.

Rail, roads, bridges, public parks, etc., are all subjected to continuous extreme conditions. Polysiloxane coatings provide corrosion protection, high-temperature protection, and fire protection to ensure the durability and aesthetics of the building structures. In railways, mild steel remains the first choice of metal for constructional purposes, due to its relatively low cost, mechanical strength, and ease of fabrication. The main drawback of the use of this metal is that it corrodes easily in extreme weather conditions. Unless adequately protected it rapidly loses strength, which may result in structural failure. Thus, polysiloxane coatings (which have anti-corrosive properties) are applied to the exterior of the rails.

Assertion about non-toxic behavior cannot be generalized for several of the poly-siloxanes, including the polydimethylsiloxane (PDMS). Structure and size of the molecule affects the ionic migration, toxicity and absorption in the animal and human body. The issue of the safety of the silicones is more crucial, especially when related to contact with adults, children and newborns. The toxicity of polysiloxane is expected to hinder the market growth during the forecast period.