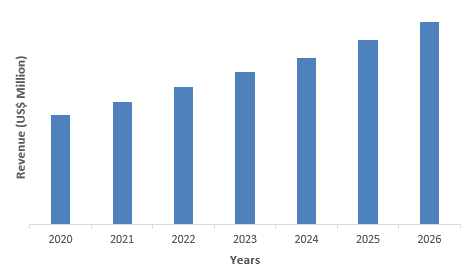 Liquid segment held the largest share in the purging compound market in the year 2020 and is expected to rise at a CAGR of 4.9% during the forecast period. Liquid form of purging compound is highly effective in removing thermoplastics.Liquid purging compounds are also extensively used in thermoplastic processors and also used in high impact poly styrene, which is easy to thermoform and fabricate. It is also highly effective in the treatment of several chemicals that are in a granule structure of ultra-high purity purges. Liquid purges are very effective in resin and color changes. This also helps in providing easy, quick, safe and cost-effective conventional processing. It also provides various advantages such as non-requirement of soaking and cracking in acrylic resin.

Rising demand of plastic products in various end use verticals

The increase in demand for plastic products in various end-use industries such as consumer products, electronics and packaging has given rise to the use of machinery producing such plastics which in turn has increased the use of purging compounds which is necessary to keep the machinery clean and maintain them. Purging compounds are widely used for effective cleaning of plastic processing equipment, which consists of scrubbing granules, which penetrates into dead spots and hot spots of machines to remove carbon build up which comprises of layers of separated additives and degraded polymers.

There is various statutory compliance which is made compulsory with various legal and administrative bodies to avoid any kind of mishap or accidents in the production process. Using purging compounds in the processing of food products and pharmaceutical devices or products have been made compulsory by OEMs and brand owning consumers failure of which gives the latter legal rights to reject the products. Making it legally compulsory has increased the use and demand for purging compounds, and non-compliance of this law might invite legal actions.

With better performance and increase in the quality of machine uptime, there are very less wastages and downtimes. Therefore, the cost related to idle time, downtime, scrap and wastages can be reduced to a great extent. This helps in the overall production cost of the manufacturing unit, which is hugely driving the purging compounds market.

There are various stringent regulations regarding the use of purging compounds, especially for waste water treatments, because the water wastes generated from manufacturing purging compounds are hazardous to the environment, which has to be compulsorily followed by manufacturers, which could prove expensive and attract legal actions if not followed. Several food and drug regulation bodies in various countries like FDA of US and Central Drugs Standard Control Organization of India has made using purging compounds as a compulsory compliance for packaging food, beverages and drugs. In European region, the containers in which purging compounds are shipped must bear the CE Mark as a statutory compliance in relevance to European Union (EU) directives for health and safety.