The covid-19 outbreak has majorly impacted the sustained release coatings market. The market was hampered due to disruption in raw material supply, logistics failure, and other lockdown restrictions. The sustained release coatings have major demand in the pharmaceuticals sector, hospitals, and others. The worldwide pandemic has created a slowdown such as production halts, unavailability of raw materials, supply chain disturbances, and others constraints. The pharmaceuticals sector was also disturbed in the early phase of covid-19. The restrictions in travel, transportation shutdown, and manufacturing operations halt were faced by the drugs and medicine producers. The demand for specific medicine or drugs was high; however, the supply side was disturbed due to rising raw material or ingredient costs, declining manufacturing capacities, and logistical challenges. According to the United States Census Bureau, the revenues of medical and diagnostic labs were down by 10.8% in the first quarter of the year 2020. However, the pharmaceuticals industry saw a surge in demand with rising production and growth in pharmaceutical drugs supply in the later phase. According to Food and Drug Association (FDA), more than 670 drug development programs were done, with 14 covid treatments authorized for emergency usage. Furthermore, health spending reached USD 8.5 trillion in 2019, with a 9.5% share in the global GDP, as per the World Health Organization report. The supply for various prescriptions, generic and other drugs increased, thereby boosting the application of sustained-release coatings. 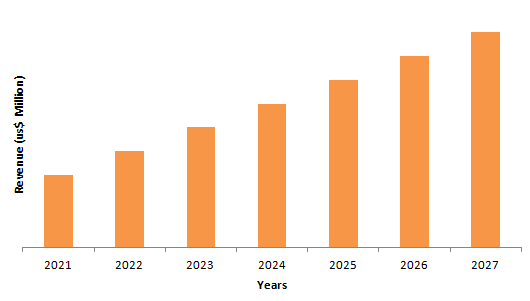 By substrate, the tablets segment held the largest sustained release coatings market share in 2021 and will grow at a CAGR of 5.9% during the forecast period. The growth for tablets in sustained release coatings is influenced by the development of mini-tablets in the market. The demand for tablets is rising due to their faster production, cost-efficiency, and dominant consumption in pharmaceuticals. According to India Brand Equity Foundation (IBEF), the estimated Indian pharmaceutical market was around USD 42 billion in 2021 and is expected to reach USD 65 billion by 2024. The sustained release coatings are made up of cellulose acetate, polyvinyl acetate, methacrylic acid, ethyl and methyl cellulose, PEG, and others, which offer wet granulation protection, strength, and efficiency. Furthermore, various advantages in manufacturing, less requirement of coating material, and low dose dumping risks are creating a high demand in the global pharmaceuticals sector. Furthermore, the tablet substrate is growing in the sustained release coatings industry due to advancements in modified-release formation, tablet systems, and others, thereby dominating the market in the coming years.

By application, the in vitro segment held the largest share in 2021 and is expected to grow at a CAGR of 4.6% in the sustained release coatings market during the forecast period. The growth of in vitro application is majorly influenced by the rising drugs production and advanced pharmaceuticals production across the world. According to the International Federation of Pharmaceutical Manufacturers & Association (IFPMA), around 2500 drugs for cancer, 1400 for neurology, 1200 for infectious disease, and 1500 for immunology were developed in 2020. In vitro, the blends of hydrophilic and hydrophobic polymers are employed as a coating material to control and manage the drug release. The growth in pharmaceutical drugs consumption, majorly in the pediatric and geriatric population is influencing the demand in the market. The promising delivery system for drugs with high sustained released action and drug bioavailability is influencing the growth of in vitro applications. Thus, with major development and drugs production, tailored drug dosing mechanism, and enhanced efficiency in the in vitro applications, the demand for sustained release coatings industry will rise in the forecast period.

The growth in the medical or pharmaceutical sector is high owing to increasing development and production. Various producers have increased the production of generic, specialty, or other medications type. The growth in pharmaceuticals is driving the market for sustained release coatings industry due to high applications and consumption in the medical sector. The high demand for treatment drugs and vaccines is boosting the pharmaceutical sector. The investment and R&D projects in the medical field are offering advancement in the modification and production of the drug. Furthermore, as per data from ICRA, the revenue growth for the financial year 2022 is estimated at around 9-11%, supported by a strong recovery post-pandemic. Thus, with the growing medical and pharmacy segment, the demand for sustained release coatings in tablets, capsules, pills, and others is growing in the forecast period and offering major dominance in the drug delivery mechanisms.

The rise in pediatric and geriatric dosage demand

The sustained release coatings are in demand due to their tailored drug dosage features and low drugs dose consumption regimen. The challenge of alcohol-based dose dumping is faced, when the active pharmaceutical ingredient (API) is released, with rupture of the coatings. For instance, the FDA has specified the withdrawal of hydromorphone, as an alcohol-induced dose dumping. The alcohol presence usually retards the drug release and causes tablet swelling. Furthermore, the high cost of the microencapsulation technology has created a major challenge in the applications in pharmaceuticals, agrochemicals, and others, thereby increasing the overall costs and making the final product expensive.

Technology launches, acquisitions, and R&D activities are key strategies that are adopted by the dominant players in this market. Sustained Release Coatings top 10 companies include: