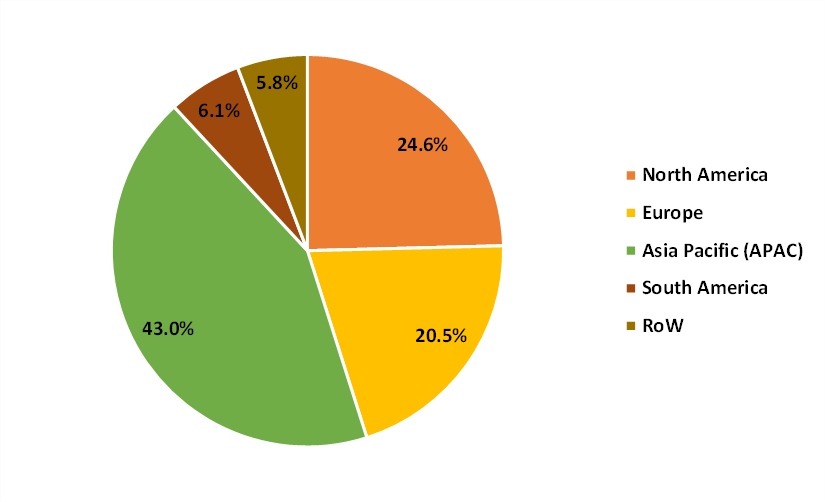 The catalyst segment held the significant Chloroplatinic Acid Market share in 2021 and is expected to grow at a CAGR of 4.2% during 2022-2027. Chloroplatinic acid plays an important role in the formation of catalysts for chemical reactions related to hydrogenation. During catalysis, when silicon hydrides are added, they changed into olefinic comprising of double bonds with the aid of a transition metal catalyst such as palladium or nickel. Similarly, like other platinum compounds, the addition of acid catalyzes results in silanes and thereby changes them into alkenes. The rise in metal production will expand segmental growth. For instance, as per U.S. Geological Survey and Mineral Commodity Summaries in January 2022, the total production of nickel is around 18,000 metric tons in 2021 which is comparatively higher than 2020 which is 16,700 metric tons. The rise in the production of various metals such as platinum, nickel and others will raise the segmental growth and in turn anticipates the Chloroplatinic Acid Market size during the forecast period.

Asia-Pacific region dominated the Chloroplatinic Acid Market share by 43% in the year 2021, owing to the rising chemical, food & beverages, pharmaceutical, beauty & personal care industries in the region. Chloroplatinic acid finds its application in many applications such as potassium determination, purification of platinum, catalysis and many more. As per China Corporation, China is the world’s largest consumer market for food and beverage with an annual growth of around 15% in 2021 and generating a revenue of more than US$98 billion.  Also, according to International Trade Association, the cosmetics retail sales value of China increased to US$52.3 billion in 2020, making it the world’s second-largest beauty and personal care product market after the United States. Furthermore, in June 2020, the government of India launched a Pradhan Mantri Formalisation of Micro food Processing Enterprises (PMFME) Scheme, under the ‘Aatmanirbhar Bharat Abhiyan’ and ‘Vocal for Local’ campaigns, to provide technical, financial and business support to micro food processing units in the country with the total fund valued at Rs. 10,000 crores (US$ 1.3 billion) and will be disbursed from 2020 to 2025. Such initiatives and investments from the government for food & beverages and development in various end-use sectors in the APAC countries are anticipated to increase the demand for chloroplatinic acid and are proving to be a market booster for the Chloroplatinic Acid Market size in this region during the forecast period

Chloroplatinic acid (hexachloroplatinic acid) is an inorganic compound and is soluble in water. Hexachloroplatinic acid is an important source of platinum that is produced by dissolving platinum and is used to determine potassium and many more. For instance, as per U.S. Census Bureau, the total production of platinum in the U.S. is around 289 kilograms and palladium is 970 kilograms in May 2022. The rise in production will eventually boost market growth. Platinum and its alloys are widely used in surgical instruments, laboratory equipment, electrical resistance wires electrical contact points. Also, it is used as a catalyst (30%) in the catalytic converter, which is an optional component of the gasoline-powered automobile exhaust system The rise in demand for platinum-based products in various end-use industries will drive the Chloroplatinic Acid Market.

Chloroplatinic acid is widely used in the potassium determination, purification of platinum and catalysis which are widely used in the production of various metals such as platinum. Platinum is widely used in surgical instruments, laboratory equipment, electrical resistance wires and electrical contact points. According to International Trade Administration, the total local production market size for medical equipment & devices in Spain is expected to reach US$2,984 million in 2022. Also, the medical device market is valued at approximately US$6.5 billion and is expected to grow by 2.1% per year until 2026. Furthermore, India is among the top 20 markets for medical devices globally. The medical device market is expected to increase at a 37% CAGR to reach US$50 billion by 2025, from US$10.36 billion in 2020.  Thus, the rise in the growth of the medical device sector will drive the demand for the Chloroplatinic Acid Market during the forecast period.