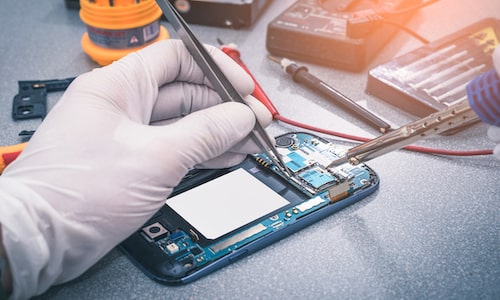 Today, the semiconductor industry is one of the largest and fastest growing industries. With it's rapid expanding pace, this industry can be divided into 4 main categories including :

With increasing competition, the semiconductor manufacturers are designing faster, cheaper and smaller chips today. However, even as new chips are being launched into the market, they are rapidly growing old and the semiconductor producers are left with no option but to produce an improvised version at an even lesser price so that they are able to attract and retain customers. This replacement cycle which used to be around 4 years previously is now less than 2 and will reach 1 year soon.

Earlier, semiconductor producers controlled the complete production processes, however, now they are assigning an increased number of processes to others.

While the industrial and automotive markets offer good enough potential for growth of semiconductors, the rise in the sales of tablets, smartphones and digital set-top boxes also drives the semiconductor industry to a large extent. According to market experts, China will strengthen its position as the leading semiconductor manufacturer further. The production capacity for semiconductors would increase globally in order to meet the increasing demands of customers worldwide. Market analysts also felt that semiconductor producers are moving towards manufacturing of small sized semiconductors that have wafers with large diameters.

Why Market Research is Important?

At present, the semiconductor industry is witnessing a huge transformation, even as computing and mobile devices are becoming cheaper, smaller and thinner. Experts feel that technical innovations and challenges such as 450mm fabs, 3D stacking, multi-patterning, lithography scaling and transistor architecture will force the manufacturers to evolve their product production and development procedures further. Given that the semiconductor industry registers revenue figures of close to $300bn annually, it is one of the most crucial markets today. Thus, it is important for semiconductor manufacturers to do their market research on a constant basis. This would allow them to keep a track of growing or declining demand for semiconductors and innovate their processes and technologies accordingly.

What solutions we can Offer?

Today, the semiconductor sector faces a number of challenges, both from technological and business point of view. Given that huge amount of money is required for innovative and better fabrication units, many of the Integrated Device Manufacturers are changing their model of business to either fabless or fablite. In addition to this, the semiconductor manufacturers are producing inexpensive chips and marketing them within a short period in order to survive in the market. With respect to the increased demand for semiconductors from industries such as consumer electronics, computing, industrial and automotive components, IT hardware and telecommunications, it has become important that OEMs, IDMs, foundry and fables companies opt for comprehensive solutions in areas such as:

In a nutshell, even as the year comes to an end, the demand for semiconductor would slow down to a considerable extent. Thus, the semiconductor market would now grow to around $301 billion in the year 2013, which would only be 2.4% more as compared to 2012.