India is one of the strongest growing economies among the Asian emerging markets. Indian industry is rapidly moving towards automation for increasing production volume, accuracy, and safety. To build up the industrial automation for increasing the product supply and domestic manufacturing. Indian Industrial Robotics market was evaluated at 4,564 units in 2018 and is estimated to grow at 13.3% CAGR from 2019-2024. For meeting the automation needs, recently in 2017, the Indian market installed 30% more industrial robots compared to 2016. Industrial Robotics manufacturers are now considering India as a prime destination for their product sales. 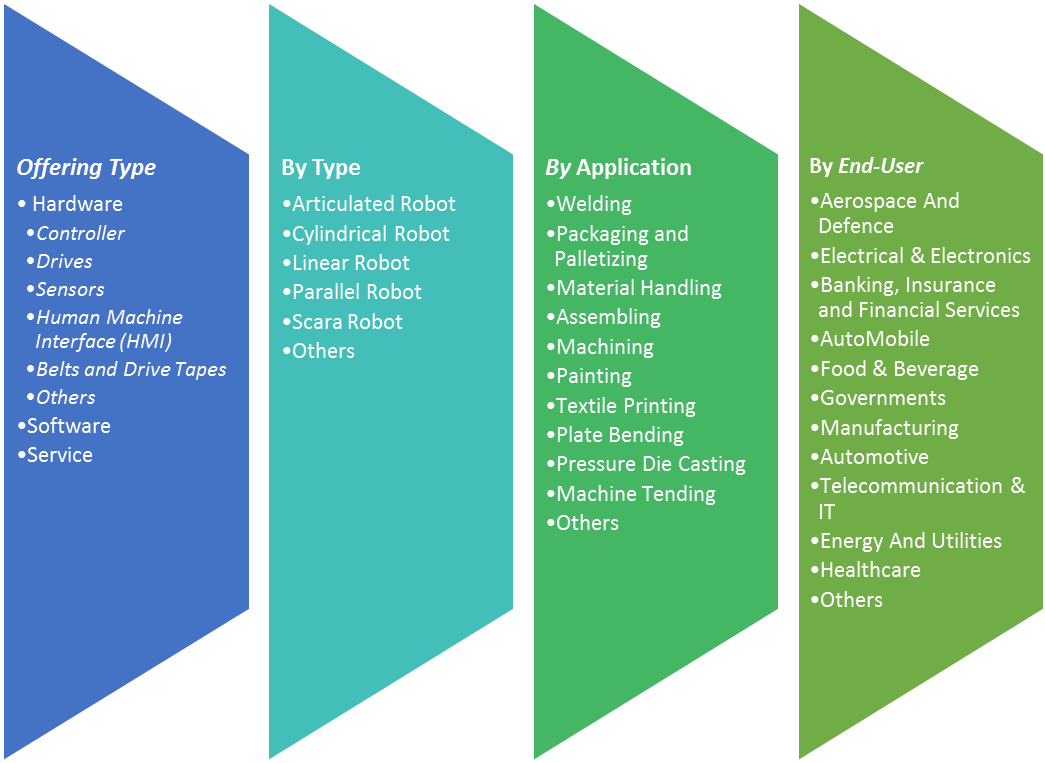 · Key players, including Kuka, Hyundai, and Yaskawa, accounted to around 45% of the total market share in 2018. While covering all the applications in the Indian industrial robotics market, these market players specifically focus more on welding, dispensing, and material handling applications.

· India’s Automobile industry is the leading end-user while generating more than half of the India Industrial Robotics market revenue in 2018.

Articulated robots are the highest robot type being used in India. Articulated robots account for more than 50% of the units being sold annually. The robots have varied from simple toe-joined structure to systems with more than ten interactive joints. Articulated robots have long reached, high speed and larger working envelope. These robots allow a high level of functionality and are the most commonly used robots in next-generation robotics. These robots are used in applications like pick and place tasks, handling jobs, thread fastening, soldering, and other similar tasks requiring fast and precise automation.

The automotive industry is the major end-users of the industrial robotics market in India, followed by the electrical & electronics while contributing around 2/3 of the Indian Industrial Robotics market revenue collectively. India is a major automotive exporter and has strong export growth expectations for the near future. Automobile exports grew by 15.5% during April 2018-February, 2019. Indian automotive industry is expected to witness various effects in the next two years.

On the contrary, implying new safety regulation and emissions laws will bring the industry a step closer to global standards. For meeting all the global standards, the industrial robotics will play a crucial role in the India Industrial Robotics market. Advancement in technology combined with an increasing need for robotic automation driven by fast, low cost and error-free operation are the major drivers for this market.

·         GROWTH IN AUTOMATION SECTOR TO BOOST THE UTILIZATION OF INDUSTRIAL ROBOTS IN INDIA:

The call for precision machining, along with high production rates, has made automation and instrumentation an indispensable aspect of manufacturing units. Almost all the processes in the production and processing plants have been automated in the past decade. This has also complemented the expansion of industrial robots integration into industrial operations.

India is analyzed to renew the process automation market owing to the escalated demands from the general manufacturing, food & beverage, and pharmaceutical verticals. Since the industrial operations are becoming complex amidst rapid technological advancements, the growth of the industrial robot is expected among such environment that is beyond the capacity of manual involvement.

The labor cost is significantly high in the total industrial operating cost, generally making 60%-65% of the total cost. In the majority of the cases, manual jobs typically consist of two categories of staff: direct and indirect. Direct staff is responsible for executing the procedure while the indirect staff is for the back-end support for immediate staff.

The presence of both direct and indirect staff coupled along with department managers, presents an important cost in operating a warehouse.

The automation of industries has become a notable means to tackle the rising wages and workforce age. This has resulted in the industrial operators to rely upon the robotics to provide a convenient and efficient way of reducing the operational costs while simultaneously maintaining the productivity at optimum levels.

Emerging out of the high initial cost of industrial robots is the need to make profits. In recent times, robots have become a commodity rather than a novel product which creates notable expectations from them in creating huge profit margins. The robots Return On Investment (ROI) generally lies in the period of 4 to 6 years, which deters market significantly. In the long-term, the robots prove to be a significant value addition product by providing several advantages over manual labor in terms of operating costs and productivity, but the initial skepticism associated with robots. ROI still looms over the strategies of short time industrial operators, thus acting as a hindrance to the market emergence.

Ø In July 2019, Lockheed Martin (US-based aerospace and defense company) signed Memorandums of Understanding (MoUs) with three startups from India - Terrero Mobility, Sastra Robotics, and NoPo Nanotechnologies. The startups will integrate with Lockheed Martin’s supply chain, and contribute to the evolution of both the Indian and global aerospace and defense industry.

The base year of the study is 2018, with forecast done up to 2025. The study presents a thorough analysis of the competitive landscape, taking into account the market shares of the leading companies. These provide the key market participants with the necessary business intelligence and help them understand the future of the Indian Industrial Robotics market. The assessment includes the forecast, an overview of the competitive structure, the market shares of the competitors, as well as the market trends, market demands, market drivers, market challenges, and product analysis. The market drivers and restraints have been assessed to fathom their impact over the forecast period. This report further identifies the key opportunities for growth while also detailing the key challenges and possible threats. The key areas of focus include the offering type, robot type, end-users, and application of Indian Industrial Robotics market.