EMEAI Architectural Coatings Market is forecast to reach $22.75 billion by 2025, after growing at a CAGR of 4.50% during 2020-2025. The EMEAI architectural coatings market is witnessing high growth on an account of technological advancements, increasing applications and the growing demand in Europe. The economic growth in developing countries, stringent environmental regulations, increasing investment in infrastructure, growing purchasing power, and the rising demand for environmentally friendly and green coatings are also leading to the growth of the EMEAI architectural coatings market during the forecast period. 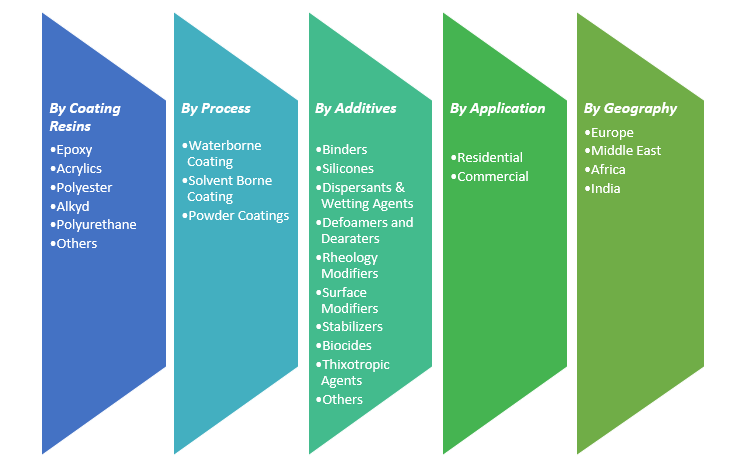 Alkyd holds the largest share in EMEAI architectural coatings market in 2019, up to 29%. Low cost of alkyd resins, properties such as good adhesion, weathering and high, dry temperatures, quick-drying and many more, and familiar end-user utility drive the alkyd coatings market. Increasing investment in the industrial sector and preference for special-purpose coatings are important opportunities in the industry.

Architectural is the major end-user of the waterborne coatings, accounts for more than around 50% consumption of EMEAI waterborne coatings. The water-soluble paints market is majorly driven by its increasing use in the building and construction sector owing to its good corrosion protection and high gloss properties, over other types. The growing population coupled with the increasing demand for residential and commercial buildings is expected to drive the growth of the market. High disposable income and changing lifestyle are other factors driving the market growth.

Residential segment held a significant share of the EMEAI architectural coatings market in 2019. Architectural coatings are used in interiors of houses for decorative purposes, along with a wide range of other functions. Their functions vary, depending upon the type of environment and the room that they are used on. For example, due to the moisture, bathroom walls need to have wipe-ability, in order to keep them clean. Paints with glossier sheens have a tighter molecular structure than flat paints, making it more difficult for moisture to penetrate. Thus, these types of paints are used in bathrooms. There are various types of coatings like performance coatings and fire retardant coatings. Fire retardant coatings are classified into intumescent coatings and non-intumescent. Non-intumescent coatings are basically architectural, decorative coatings that contain flame retardant additives designed to reduce the rate of flame spread and smoke development of combustible substrates. Fire retardant is to increase the fire resistance of the film, including organic and inorganic retardants containing halogen or phosphor, such as chlorinated paraffin. With the growing population and increasing global migration towards the developed nations, the construction industry is estimated to rise substantially which in turn drives the EMEAI architectural coatings market.

Europe dominated the EMEAI architectural coatings market with a share of more than 70% during the forecast period. In Europe, government spending has been increasing, in order to construct affordable housing facilities, to cater to the housing demand. European construction sector provides 18 million direct jobs and contributes to about 9% of the EU's GDP. Apart from Europe, India held a significant share of the EMEAI architectural coatings market. In India, the infrastructure sector has become one of the major focus areas for the government. The government aims to boost the construction of buildings in the country and has decided to come up with a single-window clearance facility, in order to provide speedy approvals of the construction projects.

Architectural coatings suffer many of the same defects on an application similar to other coatings. The common problems occur are Blistering, Flaking and chalking, Discoloration and staining and surface imperfection. Blistering in architectural coating is caused by a localized loss of adhesion and lifting of the paint film from the underlying surface. In some cases when solvent gas expands on sunny facades blistering tends to occur in fresh coats of paint. Further, the moisture can cause blistering when enclosure material is not dried up. The flaking and chalking are caused by decomposing paint and are different from efflorescence or mottling which display white, crusty mineral salt deposits that leached from mortar, concrete behind the paint. The discoloration result from a number of factors such as biological growth, environmental conditions, oxidation, surface leaching, and light exposure. The surface deformation occurs due to application on the cold surface, and coating layer applied too thickly.