Amines Market is projected to grow at a CAGR of 7.8% duringand is expected to reach USD $18.8 billion by 2027. Amines are broadly defined as a functional group made up of a nitrogen atom with a lone pair in organic chemistry. Amines are derived from ammonia where one or more of the hydrogen atoms are replaced with alkyl or aryl groups. In organic chemistry, the most forms of amines are alkyl amines, like trimethylamines, and arylamines, like aniline which is the most common aryl or aromatic amine. While it is often used extensively in organic chemistry, there are inorganic amines as well, a common example being monochloramine. Amines are the primary building blocks of daily lives, being used in almost every aspect, like pharmaceuticals, textiles, personal care and cosmetics, and agriculture. The amines used in daily lives are most commonly biogenic amines which are essential for natural metabolic and physiological functions. The report covers various segmentations of the Amines Market and analyze the Market landscape, drivers, and challenges.

During the COVID-19 Pandemic, many markets and industries experienced a decline in their business. This is primarily due to the lockdown protocols mandated by the various governments globally. The supply chain was heavily disrupted and production facilities were non-functional. Many End-Use Industries of Amines, such as the Paints and Coatings, the Personal Care and Cosmetic, Textile, and so on, were at a loss during the COVID-19 Pandemic. According to the International Trade Centre (ITC), the Textile and Apparel Sector saw an 11% drop in Consumer demand in 2020 globally while the Italian Textile Machinery Manufacturers Association reported that there was a 44% decrease in sales of Textile machinery overseas. A similar trend followed for the other Industries as well. However, the pharmaceutical industry saw an increase in demand during the Pandemic. According to the European Federation of Pharmaceutical Industries and Associations (EFPIA), the Pharmaceutical Industry in North America saw a growth of 3.3% in 2020 while Europe saw a growth of 3.9%. Amines are one of the essential feedstock’s for Pharmaceuticals, so even though there was a decline in the other end-use Industries for Amines, the demand for Amines increased on the side of Pharmaceuticals. The Pandemic proved to be a turbulent time for the Amines market however, the situation is improving globally, and many countries are now relieving lockdown protocols. As a result, the Amines Market is forecasted to witness increased growth in

The report: “Amines Market – Forecast (2022-2027)”, by IndustryARC, covers an in-depth analysis of the following segments of the Amines Market. 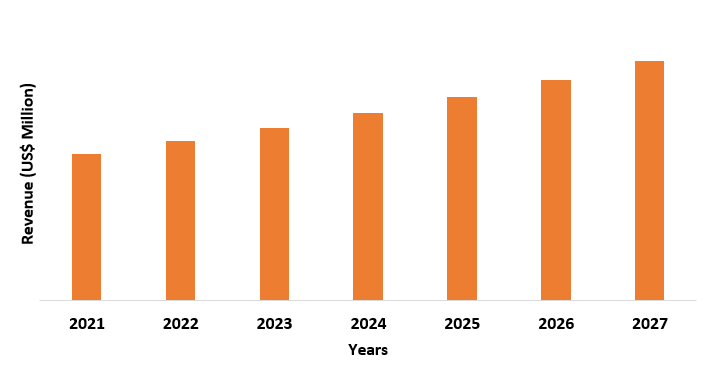 Ethanolamines hold the largest share of 38% in the type segmentation in 2021. Ethanolamines are amines that form a bond with ethanol. It is unique in characteristics such that it possesses properties of both primary alcohol and a primary amine. Some common sub-segments of ethanolamines are triethanolamines and diethanolamines. Ethanolamines are used as raw materials for a variety of products such as detergents, pharmaceuticals, agrochemicals, and chemical intermediates. It is also commonly used as a solvent, corrosion inhibitor, and surfactant. Its diverse nature also makes it useful in regulating pH in cosmetics. Other common types of Amines are alkylamines also known as aliphatic amines, these amines commonly substitute one of the hydrogen atoms with an alkyl group. Some examples are methylamine, ethylamine, and propylamine, where they replace one, two, and three hydrogen atoms from ammonia respectively. There are also fatty amines, where the amine is connected to a hydrocarbon chain, aromatic amines, where the amine is connected to one or more aryl groups, and specialty amines.

Solvents hold the largest share of 35% in the function segment in 2021. Amines exhibit excellent solvent properties due to which they are extensively used as a solvent for fats and oils. Amines are used as solvents in combination with fatty acids, to form various types of emulsions such as lotions and creams. Their solvent functionality is also used in the manufacture of a variety of chemicals like agrochemicals and pharmacological drugs as well as emulsions. This is because Amines form excellent intermediates concerning those chemicals. Amine solvents are also considered to be the most developed form of carbon dioxide capture which helps reduce greenhouse gases in the environment. Due to this reason, Solvents holds the largest share in this segmentation. Amines are also commonly used as catalysts in various processes and are used as corrosion inhibitors and surfactants.

Agrochemicals application holds the largest share of 30% in the Application segment in 2021. Amines serve as an essential feedstock for chemicals used in the Agriculture Industry. They are primarily used for crop protection in chemicals like pesticides, herbicides, insecticides, and so on. Other than crop protection, they are also used in fertilizers, emulsifiers, and other chemical processes. There is always growing demand for high-quality crops and produce which is why amines prove to be essential in maintaining the quality of products in the agriculture business. According to the Ministry of Chemicals and Fertilizers, India’s estimated production of Fertilizers for the year 2020-2021 is 47.8 million metric tons, which is an increase of 12.4% in comparison to the previous year. Other applications of amines include water treatment, gas treatment, polymers and resins, petrochemicals, and so on.

Agriculture Industry holds the largest share of 41% in the End-Use Industry segment in 2021. As mentioned above, agrochemicals see the most use of amines as it is used for a variety of applications like pesticides, fertilizers, emulsifiers, and chemical processes. According to the Food and Agriculture Organization of the United Nations, the global agriculture market is recorded to have a seventh consecutive monthly increase in December 2020 of 2.3% from November and 3.1% year-on-year. The Pharmaceutical Industry is one of the fastest-growing industries when it comes to the demand for amines. This is because amines are used for a variety of uses such as the production of drugs as well as solutions and emulsions. Some popular drugs that are amine-based are amphetamine, tramadol, atenolol, norepinephrine, and so on. Other End-Use Industries include the paints & coatings industry, oil & gas industry, automotive industry, textile industry, personal care & cosmetics industry, and more.

Asia-Pacific region holds the largest share of 47% in the Amines Market in 2021. This is because of the growth of key industries in the Asia-Pacific region like the agriculture industry as well as the personal care and cosmetics industry. This is especially true for China and India where the quality of life and their disposable income has increased substantially. According to India Brand Equity Foundation (IBEF), the total food grain production in the country was estimated to be 296.65 million tons in the Fiscal Year 2020, which is an increase of 3.9% from FY 2019. According to the United States Department of Agriculture, China is the world’s largest agricultural importer in 2019 with imports valued at USD $133.1 billion. According to the International Trade Administration, the Personal Care and Cosmetics Market of China is valued at USD $42.8 billion in 2020 and is estimated to become the largest market within the next five years. Due to the growth and dominance of these markets in the Asia-Pacific region, the Amines Market is most prominent in Asia-Pacific as well.

The increase in quality and growth of the Pharmaceutical Industry:

Harmful Effects of Amines and Amine-based Chemicals on health:

While various amines such as biogenic amines are helpful for the human body and prove to be essential, there are a variety of amines too that are hazardous to the humans. Some examples of these amines are triethylamine and N, N-dimethylethylamine, which are primarily used in epoxy, foundry, and polyurethane foam industries. These amines are known to cause glaucopsia, a disease that causes blurring of vision. Another toxic form of amines is Allyl Amines, which are used in vulcanizing rubber, in the synthesis of ion-exchange resins, and as an intermediate in pharmaceutical synthesis. Allyl Amines are known to cause liver and kidney damage and repeated exposure can sometimes adversely affect the nervous system as well. As such, these factors prove to be a challenge for the Amines Market.

Technology launches, acquisitions, and R&D activities are key strategies adopted by players in this market. Amines top 10 companies include:

On 11 October 2021, Arkema S.A. announced that they will be increasing their Rilsan polyamide 11 powders production capacity by setting a new production plant in Changshu platform, China. It is scheduled to commence in the first quarter of 2023.

On 10 June 2020, BASF SE and ExxonMobil Catalysts and Licensing LLC announced the launch of an energy-efficient amine gas treatment called OASE sulfexx. This revolutionary amine-based solvent is designed to remove hydrogen sulfide while minimizing the absorption of carbon dioxide from gas streams.

On 3 May 2019, Arkema S.A. announced that they will set up a new world-scale plant for the manufacture and production of the amino 11 monomers and of Rilsan polyamide 11 resins in Jurong Island, Singapore. The plant will be completed by end of 2022.