The Caffeine Market size is estimated to reach $23.3 billion by 2027 and it is poised to grow at a CAGR of 7.2% over the forecast period of 2022-2027. Caffeine's expanding uses in numerous end-use industries, such as cosmetics and food and beverages, are likely to boost caffeine industry demand. And increased caffeine consumption to treat diseases such as colon, liver and colorectal cancers is fueling the caffeine market size. Caffeine is a white crystalline powder that is extracted from plants. It is known as a drug that stimulates the nervous system in the pharmaceutical industry. Caffeine levels in cocoa beans range from 0.1 to 0.7 percent. Caffeine can also be found in small levels in the skin that surrounds cocoa beans. Caffeine derivatives made from synthetic sources are known as synthesized caffeine. Unlike natural caffeine, which is derived from coffee, tea, cocoa leaves and other natural sources, synthetic caffeine is created in a laboratory using a variety of chemical components. Urea and cyanoacetic acid are the major synthetic substances that are utilized to make synthetic caffeine.

The “Caffeine Market Forecast (2022-2027)" by Industry ARC, covers an in-depth analysis of the following segments in the Caffeine Market. 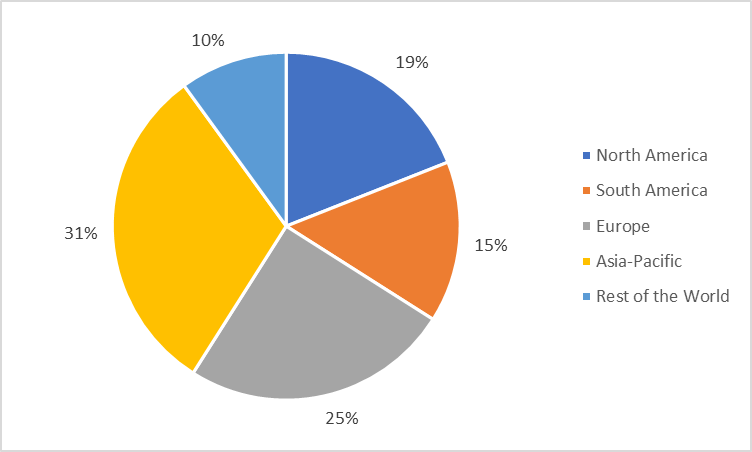 The Caffeine Market based on type can be further segmented into Natural Caffeine & Synthesized Caffeine. The Natural Caffeine segment held a dominant market share in the year 2021. Natural coffee is in high demand owing to the numerous health benefits it provides. For instance, it's high in antioxidants like polyphenols, flavonoids and catechins. It acts by preventing adenosine receptors in the brain from functioning. This prevents the brain from recognizing that it is weary, which is why caffeine is so good at combating tiredness and assisting in staying awake. However, Synthetic caffeine is poised to be the fastest-growing, with a CAGR of 8.4% over the forecast period of 2022-2027. The demand for the product is being driven by rising consumer preferences for instant energy drinks. Moreover, Synthetic caffeine is high in antioxidants and is predicted to gain popularity in the near future as people's reliance on rapid energy items grows.

The Caffeine Market based on type can be further segmented into Food & Beverages, Pharmaceuticals, Flavors & Fragrances, Skin Care Products and Others. The Food & Beverages segment held a dominant market share in the year 2021. This is mainly attributed to rising consumer demand for caffeinated beverages such as tea, coffee and soft drinks. However, Flavors & Fragrances is poised to be the fastest-growing, with a CAGR of 9.5% over the forecast period of 2022-2027 owing to the rising popularity of caffeine in fragrances among customers. Caffeine flavor and fragrance compounds come in a variety of forms, including synthetic substances as well as coffee extract. Caffeine is a popular scented candle scent and it's even been utilized to generate muskier undertones in a number of perfumes and colognes. Caffeine energizing properties have made it popular as a room deodorizer and it has also been employed in a variety of "novelty" fragrance items.

Based on Geography the Caffeine market can be divided into North America, Europe, Asia-Pacific, South America and the Rest of the World based on geography. Asia-Pacific held a dominant market share of 31% in 2021 owing to the focus of cosmetic manufacturers in the region on launching products with natural ingredients. However, owing to the rising consumption of caffeinated beverages in the region, the North American caffeine market is likely to rise at a substantial rate during the forecast period. Furthermore, caffeine is a common element in weight-loss products. As a result, increased obesity rates in the region will increase caffeine demand over the projection period. Obesity is predicted to increase national healthcare costs in the U.S. by US$149 billion a year, according to the Trust for America's Health, a Washington, D.C.-based health policy organization.

Coffee consumption has risen throughout South and East Asia and this expanding market is likely to fuel the caffeine industry. In most Asia Pacific countries, including China and India, busy lifestyles and longer working hours have contributed to an increase in caffeine use to combat drowsiness and exhaustion. For instance, according to ICO’s annual report published in 2019, coffee consumption in South and East Asia has grown at a pace of 6 percent in the last 25 years. According to the USDA, around 80% of adults in the United States consume caffeine on a daily basis each year. Moreover, key manufacturers in the industry are developing new caffeinated goods in response to increased demand for organic meals thus enhancing caffeine market share.

Caffeine is extensively used throughout the pharmaceutical and personal care industries as an ingredient. Increased usage of coffee-flavored personal care products is expected to boost the caffeine market demand. For example, according to L'Oreal S.A.'s quarterly report released in April 2020, skincare-focused brands including Kiehl's, Lancôme and Helena Rubinstein beat the company's other luxury brands in the first quarter of 2020. The personal care brand caffeine is mostly based on cocoa beans. It has already reached cult status in the Indian D2C beauty market, having sold over 10 million goods. The business is no stranger to the 'world's first club,' which debuted the world's first coffee bean-shaped bathing bar in late 2020 (patent pending in India). As a result of skincare firms focusing on personal hygiene and cleansing products, demand for cosmetic chemicals like caffeine is predicted to rise.

Over consumption of caffeine causes negative effects such as restlessness, insomnia, headaches, dizziness, dehydration and anxiety. These adverse effects prompted customers to seek out healthier caffeinated substitutes. Ginseng, pomegranate juice, maca, baobab and reishi are just a few of the caffeine substitutes. The FDA has found that 400 mg per day roughly 4 or 5 cups of coffee is not typically associated with dangerous or damaging effects in healthy people, but that exceeding this amount can have harmful implications. According to Mayoclinic, The US Food and Drug Administration has warned that caffeine in powder or liquid form can contain hazardous quantities of caffeine. Each teaspoon of caffeine powder is about the same as 28 cups of coffee. Furthermore, food ingredients industry players are focusing on creating items that may replace caffeine in food products, which is projected to limit caffeine market growth.

Product launches, mergers and acquisitions, joint ventures and geographical expansions are key strategies adopted by players in the Caffeine Market. The top 10 Caffeine Market companies are-