The Diclofenac Market size is set to reach $6.1 billion by 2027. Furthermore, it is poised to grow at a CAGR of 3.9% over the forecast period of 2022-2027. Diclofenac’s are a class of nonsteroidal-inflammatory drugs that are used to treat patients in varieties of applications. Initially, the advent of the drug was done to treat inflammation-related ailments in patients suffering from eye problems; however, the drug was researched further and now is being actively given to patients suffering from joint pain, strains, migraine, toothache, and ankylosing spondylitis. The primary ingredient for the same is diclofenac sodium. The tablets are being readily modified the exhibit the function of SR or sustained release which allows the patient to be relieved from the pain for long hours. However, the former variant or instant release is being preferred by patients who are in dire need to be pain-free. Moreover, diclofenac topical solutions are actively rolled out in the market to cure various sports-related ailments and injuries, and also for patients suffering from the likes of diseases such as knee osteoarthritis. The growing burden of the geriatric population coupled with the ready adoption of diclofenac in treating sports-related injuries are the key factors driving the Diclofenac Industry during the forecast period of 2022-2027. 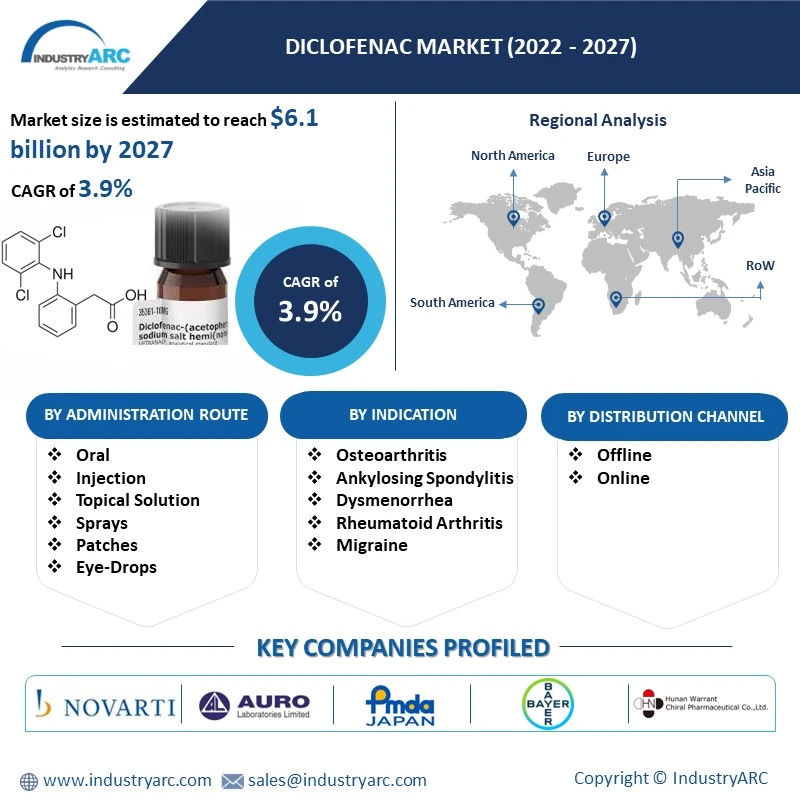 The diclofenac market based on administration route can be further segmented into Oral, Injection, Topical Solution, Sprays, Patches, Eye-Drops, and Others. The oral segment held a dominant market share in the year 2021. It is owing to the variants and combinations now being actively prescribed to the afflicted patients. Moreover, SR or LR are the variants that are substantially preferred and recommended by doctors to alleviate pain for a longer period. SR refers to sustained release which helps in making the drug remain omnipresent in the body.

Moreover, sprays are estimated to be the fastest-growing, with a CAGR of 4.6% over the forecast period of 2022-2027. It is owing to the robust product launched being seen in the following sphere. Additionally, diclofenac sprays are actively used to treat sports injuries. With more and more sporting events being lauded by the government around, the sports pertaining injuries would rise. For example, the USA got its approval to host 1/3 of the ICC T20 World Cup, which would further allow new matches and injuries, thereby helping the market growth.

The diclofenac market based on indication will be further segmented into Osteoarthritis, Ankylosing Spondylitis, Dysmenorrhea, Rheumatoid Arthritis, Migraine, Dental Pain, Sports Injury, Chronic Pain, and Others. The chronic pain segment held a dominant market share in the year 2021. It is owing to the wide array of subjects the following indication cover. For example, sports pertaining injuries are more commonly termed under the chronic pain category. Additionally, as the geriatric population is substantial in countries like Japan and Canada, the diclofenac is readily used.

Moreover, the chronic pain segment is estimated to be the fastest-growing, with a CAGR of 4.7% over the forecast period of 2022-2027. It is owing to the growing number of sporting events, and the brand strategies being used by roping in famous starts and associating injuries with the said game, has been the most prevalent way the brands are trying to create awareness. The following will allow the market to grow at a substantial pace.

The Diclofenac Market based on Geography can be further segmented into North America, Europe, Asia-Pacific, South America, and the Rest of the World. North America’s diclofenac market held a dominant market share of 32% as compared to the other region in 2021. It is owing to the availability of robust medical infrastructure, and overall disease literacy. Additionally, the government of the US spends around $11,000 per person in a year, which pertains to the health expenditure. Additionally, the region of Canada has a robust medical infrastructure that supports the diclofenac market.

However, Asia-Pacific is set to offer lucrative growth opportunities to marketers in the projected period of 2022-2027. It is owing to the presence of major drug manufacturers operating in the following region. Additionally, the senior population caseload is expected to grow by a substantial percentage in the years to come which will again readily supplant the market. Lastly, countries such as India saw a 137% increase in their Medical Bill for 2021, as compared to 2020. Such policy measures, easy patent regulation, and FDI inflow regimen will propel market growth.

The growing number of geriatric populations globally has aided the market growth.

The geriatric or senior population is highly susceptible to having one or more inflammation-related problems. Moreover, the population is on the rise within the geriatric segment which has fuelled the demand for the use of diclofenac’s- in terms of varied administrative routes. As per US CDC, the US would observe a break-even of the geriatric population by the younger adults till the year 2036. Moreover, as per their analysis, the senior population would grow at a higher pace than younger adults, and the entire demography of the US will be governed by the aged population. The following trend holds true for the regions such as Europe and Asia-Pacific as well. As per the latest EU official issue, the country had around 21% population who were aged above 65+. Lastly, according to the American Association of Neurological Surgeons, more than 65 million Americans suffer from inflammatory disorders. Hence, diclofenac usage across the geriatric population for varied issues will help drive the market.

A constant caseload for sports-related injuries has readily aided the market growth.

Sports-related injuries, as the name suggests are mostly pertaining to young adults, specifically students participating in gaming events and tournaments. For example, each year in the U.S, 30-32.5 million children participate in one or other organized sports. Moreover, around 3.5 million injuries happen to the students participating in the said sports. This means the ratio of injury to the number of participants is close to 10%. Additionally, the most common injuries which they sustain are sprains and strains. Diclofenac is actively used in treating such sprains and injuries. Additionally, a region such as the US is observing an increasing number of sporting events held at the international level, which further is aiding the market growth.

The amount of diclofenac taken is proportional to the dosage regimen of the said ingredient. Cases pertaining to thrombotic cardiovascular events have been reported which included myocardial events and stroke by consuming diclofenac regularly. Additionally, diclofenac often causes gastrointestinal effects or adverse events, which might include bleeding, ulceration, and perforation of the stomach or intestines and can be fatal. Moreover, the geriatric population must be extremely cautious when taking diclofenac for a longer period of time, and with the growing numbers of the geriatric population, the market would take a substantial hit.