The report “Insect Pest Control Market – Forecast (2022-2027)”, by IndustryARC, covers an in-depth analysis of the following segments of the insect pest control industry. 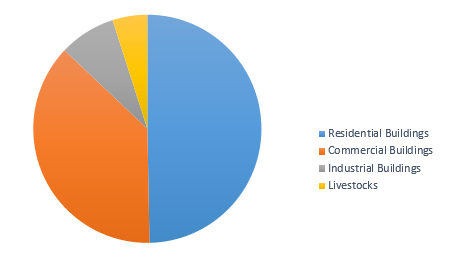 Liquid formulation segment held the largest share in 2021 and is expected to grow at a CAGR of 5.6% by 2027. Liquid formulations are generally mixed with water, but in some cases, labels may permit the use of crop oil, diesel fuel, kerosene, or some other light oil as a carrier. There are many types of liquid pesticide formulations such as emulsifiable concentrate, ready to use low concentration solutions, ultra-low volume, invert emulsion, aerosols and others. The growing demand to enhance the production of agricultural crops coupled with enhancing their yields is anticipated to drive the growth of the liquid pesticide formulations market in future. Moreover, the increasing need for maintaining adequate standards for chemical, physical and biological properties to comply with FAO specifications for insect pest control is set to drive the demand for liquid pesticide formulations during the forecast period.

Residential building sector held the largest share with 50% in the insect pest control market in 2021 and is anticipated to grow at a CAGR of 4.6% during the forecast period 2022-2027. The growing demand for biopesticide among the residential owners for a safe and quality environment influences pest control and termite prevention services to install sustainable products, and accelerate the market growth in the coming years. In addition, global warming and frequent climate change induced more pest dispersal, and thus, offer comprehensive pest control services to residential sectors. For instance, In Florida, Turner Pest Control, an Anticimex company acquired Pro-Staff Termite & Pest Control in December 2021. Also, in April 2021, Rentokil North America acquired Target Pest Control, based in Nova Scotia, Canada to continue its legacy of premium customer service in the residential and commercial Nova Scotia market. The rise of comprehensive pest management services, including general pest control, bed bug inspections, and mosquito & termite resulted in the development of the promising pest control solution in this sector. Thus, the rise in residential buildings across all regions will help to boost the demand for the pest control market in the residential building during the forecast period.

North America region dominated the insect pest control market in terms of revenue with a share of 55% in 2021 and is projected to dominate the market during the forecast period (2022-2027). Insect Pest Control is witnessing significant growth in the USA due to the significant demand for pest regulator services across the residential, and commercial spaces. For instance, in December 2021, Rentokil acquired American Pest Management of Manhattan, Kan., and Kansas City, Kan., as well as Modesto, Calif.-based Insect IQ Pest Control Services to offer the best pest control to commercial and residential areas in the Kansas City, Kan., and surrounding areas. Climate change induced more pest dispersal, and thus, to offer comprehensive pest control services to residential and commercial clients in Florida, Turner Pest Control, an Anticimex company acquired Pro-Staff Termite & Pest Control in December 2021. The growing pest control and termite prevention demand boost the market growth in the coming years.

Implementation of stringent government regulations in the developed regions, as well as the effect of climate change on insect proliferation:

In recent years, there has been a rise in both ingredient and product innovation. For instance, the use of biological pesticides, which have little to no negative impacts on human health, is gaining popularity among service providers. It is expected that the usage of pesticides for insect control would steadily decline, and that consumers will shift to biological alternatives. Regulatory changes and pest organism resistance development are major factors influencing market growth. The European Union's restriction on the use of neonicotinoid pesticides is an example of biological control approaches being preferred over chemicals. Growers have begun to use biological insecticides in place of banned older and more hazardous active chemicals. Other future legal actions reducing farmers' ability to utilise established crop protection chemicals would result in a greater market share for biological pesticides. Manufacturers are developing new goods and solutions to support more ecologically friendly insect pest management products. Manufacturers are developing new technology techniques to strengthen these facilities, such as route optimization and real-time online tech assistance. According to the “Public Health Significance of Urban Pest” publication by the WHO, climate change would result in an increase in the population of flying insects. Additionally, according to the WHO statement, fly populations would increase by 244% by 2080. The Asian tiger mosquito, which is mostly prevalent in Asian nations such as India, Indonesia, Malaysia, Myanmar, Nepal, Taiwan, Thailand, and Vietnam, has spread rapidly to 28 countries in the last ten years, according to the Centre for Agriculture and Bioscience International. This is expected to boost the market growth. Insect Pest Control is being driven by a growing concern for household hygiene in order to attain healthy living circumstances. Government legislation on food safety, public health, and environmental protection, as well as increased public awareness, drive demand for insect pest control; innovative pest control technologies are expected to provide fuel for customers. The market for insect pest control is predicted to rise due to an increase in demand for sustainable and environmentally friendly alternatives.

High registration fees and an interminable wait for product approval:

Strict and stringent regulatory standards in the environmental protection sector apply to manufacturer’s industrial processes and environments. Furthermore, these differ according to each country's policies. In many countries, the use of insect pest control is subject to registration by health, environmental, and insect pest control agencies. The policies governing the acquisition, registration, formulation, application, and disposal of pesticides are scrutinised by governments. The type of government legislation influences demand and pricing for insect pest control services. Data on product chemistry, toxicology, environmental toxicology, and toxicity to non-target organisms must be submitted as part of the registration procedure. Local testing is also necessary in some countries to assess the service impact on pest populations. Pest control chemicals are intended to either harm an insect's central nervous system, disturb mating, or eliminate infestations. To reduce the accumulation of products in the surrounding environment, the number of services utilized should be efficiently controlled by a skilled professional. In the United States, for instance, the registration process includes completing the requirements of the Federal Insecticide Act as well as the Federal Food, Drug, and Cosmetic Act. The registration costs for pest control services are significant due to the numerous testing and approvals necessary. Long testing procedures are also an impediment to service providers, as the long approval period might impair companies' patent prospects.