The COVID-19 epidemic negatively impacted the styrenic block copolymers demand in a variety of end-use industries, including automotive, construction, and more. Due to the closure of non-essential businesses, the outbreak had a significant impact on the automotive and construction industries. As demand for automobiles and construction dwindled, production was abruptly halted. For instance, global automotive production declined by 16 percent in 2020, according to the International Organization of Motor Vehicle Manufacturers. Toyota Motor Corporation's global vehicle production in 2020 was down 12.6 percent year over year due to the impact of the COVID-19 pandemic. Furthermore, construction output was significantly reduced during the pandemic. The construction industry in the United Kingdom, for example, was 11.6 percent lower in July 2020 than it was in February 2020, according to the Office for National Statistics. The level of construction activity in the United Kingdom was 10.8% lower in August 2020 than it was in February 2020. Due to this the demand for adhesive, sealant, and coating products significantly reduced, which impacted the styrenic block copolymers market revenue in 2020. 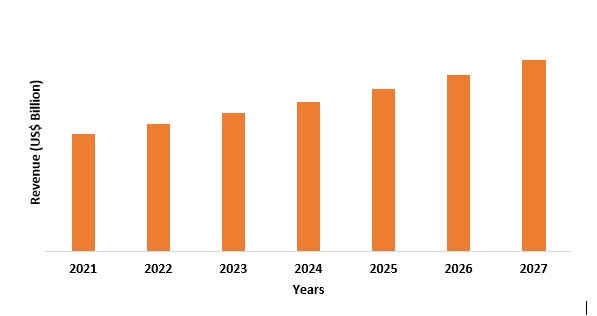 Asia-Pacific region held the largest share in the Styrenic Block Copolymers market in 2021 up to 43%, owing to spiraling demand for styrenic block copolymers from the flourishing building and construction industry in the region. Infrastructure and commercial construction projects are on the rise in countries like India, China, Vietnam, and Australia, which is expected to drive demand for styrenic block copolymers in the region over the forecast period. According to the Vietnam Ministry of Construction, the average house floor area per person in Vietnam will be 27 square meters by 2025, with 28 square meters in urban areas and 26 square meters in rural areas. The Ministry of Road Transport and Highways in India has set a goal of expanding the national highway network to 2 lakh kilometers by 2022. Currently, China is working on several airport construction projects, such as, which are either in the planning or development stages. Beijing Capital International Airport, Chengdu Shuangliu International Airport, Guangzhou Baiyun International Airport and other airports in China are among them. Between 2026 and 2027, Australia's federal government's 'Infrastructure Investment Program' is expected to give US$57.5 billion in infrastructure funding, including funding for the US$7.7 billion "National Rail Program" and equity for many other significant infrastructure investments, increasing market demand. With all such investments and a growing number of infrastructure and construction projects, the demand for adhesives, sealants, coatings, and asphalt, is likely to increase at a robust pace, thereby driving the styrenic block copolymers market in the APAC region.

The automotive industry is undergoing rapid change, which means new growth opportunities for thermoplastic elastomers (TPEs). The increased use of styrenic block copolymer (SBC) TPEs as alternatives in applications where thermoplastic vulcanizates (TPVs) may be considered "over-engineered" in terms of performance requirements, as well as in uses where SBCs provide unique advantages, has been one of the most interesting developments in automotive TPEs. Around the world, electric vehicle production and adoption are expected to increase. According to Invest India, the Indian EV market is expected to grow at a CAGR of 44 percent between 2020 and 2027, with annual sales reaching 6.34 million units by 2027. California has mandated that by 2035, all new passenger vehicles sold in the state will be 100% electric. The recently unveiled American Jobs Plan proposes a total of US$174 billion in incentives, rebates, and investments to promote the production and adoption of electric vehicles. GM has also proposed that all diesel and gasoline-powered cars be phased out by 2035, with the entire fleet being converted to electric vehicles. According to International Energy Agency (IEA), there were 10 million electric cars on the world’s roads at the end of 2020, following a decade of rapid growth. Electric car registrations increased by 41% in 2020. The styrenic block copolymer (SBC) is often used in automotive soft and rigid parts. As a result, it is expected that a gradual shift toward electric vehicles will boost the demand for SBC, propelling the market forward.

Medical devices, device parts, pharmaceutical packaging, medical bags, and tubes are all made from Styrene-Butadiene-Styrene (SBS). Its medical industry demand has been bolstered by its high durability, ease of availability, and low cost. Because of its high versatility, excellent heat and wear resistance, high stability, and enhanced abrasion resistance, styrene butadiene styrene (SBS) is one of the most widely used synthetic rubbers in the medical industry. According to the International Trade Administration (ITA), Brazil is one of the top seven largest medication and pharmaceutical markets in the world, with a market growth rate of 10.74 percent in 2019. The United States continues to be the world's largest medical device market, with a market value of US$156 billion (40 percent of the global medical device market in 2017). It is expected to reach US$208 billion by 2023. The current market size of the medical devices industry in India is estimated to be US$11 billion, according to Invest India, and represents a sunrise sector of the Indian economy. India's medical device market has the potential to grow at a 37 percent compound annual growth rate (CAGR) and reach US$50 billion by 2025. Colombia's pharmaceutical industry was worth USD 4.795 billion in 2019, according to PRO COLOMBIA, and is expected to grow at a 3% annual rate until 2022. According to the Pharmaceuticals Export Promotion Council of India, Brazil has traditionally been Latin America’s largest pharmaceutical market. By 2022, the Brazilian Pharma market is expected to touch US$31 billion. As the market of medical devices and pharmaceuticals grows, the demand for styrenic block copolymers will grow exponentially, thereby acting as a market driver during the forecast period.