The Interventional Neurology Market size is estimated to reach $3,679 million by 2027. Furthermore, it is poised to grow at a CAGR of 7.8% over the forecast period of 2022-2027. Interventional neurology is an endovascular, catheter-based approach for diagnosing and treating central nervous system vascular disorders. A digital subtraction angiography image of the blood arteries in the brain is used to diagnose a blood flow abnormality. A cerebral aneurysm (also known as a brain aneurysm) is a weakening spot in the wall of a blood artery in the brain that causes a ballooning, a carotid-cavernous fistula is an improper connection between the carotid artery and/or its branches and the cavernous sinus, a major vein which can be diagnosed by a neurologist. Malformations of the Arteriovenous System (AVMs) Arteriovenous malformations are aberrant blood vessel collections in which arteries and veins are linked directly. Arteriovenous malformations are treated with interventional neuroradiology procedures (AVMs).
One of the major factors driving the interventional neurology market is the rising prevalence of neurological illnesses. According to NCBI, Alzheimer's disease and stroke account for 21% and 51.3 percent of the 1.2 million most often diagnosed adult-onset brain illnesses, respectively.
Interventional Neurology Market Report Coverage
The report: “Interventional Neurology Market Forecast (2022-2027)", by Industry ARC covers an in-depth analysis of the following segments of the Interventional Neurology Market.
By Product Type- Cerebral Embolization and Aneurysm Coiling Devices, Cerebral Angioplasty and Stenting Systems, Neurothrombectomy Devices, and Support devices
By Disease Type- Arteriovenous Malformation and Fistulas, Ischemic Strokes, Cerebral Aneurysms, and Others
By End User- Hospitals, Specialty Clinics and Others
By Geography- North America (U.S., Canada, Mexico), Europe (Germany, United Kingdom (U.K.), France, Italy, Spain, Russia, and Rest of Europe), Asia Pacific (China, Japan India, South Korea, Australia, and New Zealand, and Rest of Asia Pacific), South America (Brazil, Argentina, Chile, Colombia and Rest of South America), and Rest of the World (the Middle East, and Africa). 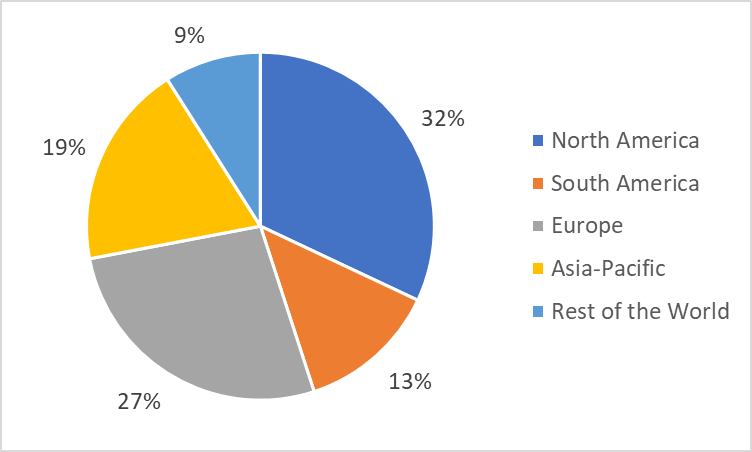 The Interventional Neurology Market based on Product type can be further segmented into Cerebral Embolization and Aneurysm Coiling Devices, Cerebral Angioplasty and Stenting Systems, Neurothrombectomy Devices, and Support devices. The cerebral Embolization and Aneurysm Coiling Devices segment held a dominant market share in the year 2021. Cerebral Embolization and Aneurysm Coiling Devices are primarily used to treat arteriovenous malformations, aneurysms, carotid-cavernous fistulas, and other neurovascular disorders. However, the Neuro Thrombectomy Devices Segment is expected to be the fastest-growing segment, with a CAGR of 8.5% over the forecast period of 2022-2027. This rapid expansion is attributed to the neuro thrombectomy device, which is designed to mechanically (i.e., activate or absorb) retrieve or destroy blood clots in the cerebral neurovasculature using a laser, ultrasound, or a combination of techniques.

The Interventional Neurology Market based on Disease type can be further segmented into Arteriovenous Malformation and Fistulas, Ischemic Strokes, Cerebral Aneurysms, and Others. Cerebral Aneurysms segment held a dominant market share in the year 2021. This is majorly owing to the global increase in risk factors that lead to aneurysms such as high blood pressure, diabetes, high cholesterol, obesity, and cigarette use. However, the Ischemic Strokes segment is expected to grow at the fastest rate with a CAGR of 8.3% over the forecast period of 2022-2027. The high growth rate of this segment is attributed to a global increase in risk factors for the disease as well as an increase in demand for minimally invasive surgical procedures. According to the Centers for Disease Control and Prevention (CDC), approximately 87 percent of strokes are ischemic.

Based on Geography the Interventional Neurology Market can be divided into North America, Europe, Asia-Pacific, South America, and the Rest of the World based on geography. North America held a dominant market share of 32% in the year 2021. The robust growth of technology in the healthcare sector in the United States, the increasing burden of neurodegenerative diseases such as Alzheimer's and Parkinson's disease, product launches, and increasing demand for minimally invasive treatment are expected to drive the market's significant growth. According to a Centers for Disease Control and Prevention article titled 'Alzheimer's Disease and Related Dementias' revised in October 2020, an estimated 5.8 million Americans would have Alzheimer's disease by 2020. According to the same source, the number of people affected by Alzheimer's disease is expected to nearly triple to 14 million by 2060. As the illness burden grows, so does the need for interventional neurology, which propels the market forward. The Asia Pacific region is expected to develop at the fastest rate owing to increased healthcare spending and an increase in manufacturers in the region, resulting in lower prices. Moreover, owing to its constantly developing healthcare system and the presence of a significant target population, Japan, Asia Pacific, is predicted to emerge as the fastest expanding regional market.

The advancements and innovations in diagnostic and imaging techniques for identifying disorders like embolisms and ischemia have resulted in earlier detection of the diseases while also making them less invasive. According to the Radiological Society of North America, Radiology exams with advanced modalities have increased by 43 percent. Health data is expected to reach more than 2,000 exabytes in 2020. This increases the demand for Neurovascular Devices for their treatment. Digital subtraction angiography, for example, is being phased out in favor of more advanced computed tomography angiography and magnetic resonance angiography. Moreover, growing market advancements are anticipated to fuel the growth. For instance, In February 2021, Medtronic announced the expansion of its limited site release of RIST Neurovascular's recently acquired radial artery access portfolio. Furthermore, Genesis MedTech joined forces with Penumbra in January 2021 to expand its neurovascular market in China.
Increasing research and development in this market is anticipated to fuel the market growth.
Rapidly expanding research and development in this market is anticipated to propel market growth. For example, in November 2020, the American Heart Association, in collaboration with the Society of Vascular and Interventional Neurology and John Wiley and Sons, released a journal named 'Stroke'. This journal is focused on Vascular and Interventional Neurology and provides new open access to topics in interventional, endovascular, medical, and surgical management of stroke and vascular disease of the brain, spinal cord, head, and neck. It will be an important platform for researchers and clinicians focused on vascular care and innovations in new procedures and treatments to share their findings. Further, according to CDC, in 2020, 1 in 6 deaths from cardiovascular disease were due to stroke. Every 40 seconds, someone in the United States has a stroke. Every 3.5 minutes, someone dies of a stroke. Every year, more than 795,000 people in the United States have a stroke. As a result, this step will increase research and development activities in the studied market, which is expected to contribute to the market's significant growth.

Government regulations are expected to limit growth opportunities in the industry.

Manufacturers in developed regions such as North America are under intense pressure owing to a lack of government support. These regulations have an impact on the pricing and clinical trials of new neurovascular devices. The Patient Protection and Affordable Care Act, for example, imposes a 2.3 percent tax on the sale of certain medical devices in the United States, forcing manufacturers to charge a higher price.