The Galacto-oligosaccharides market size is projected to reach $1.8 billion by 2027. Furthermore, it is poised to grow at a CAGR of 6.1% over the forecast period of 2022-2027. Galacto-Oligosaccharides also known as oligogalactose or transgalactooligosaccharides belong to the group of prebiotics. Additionally, it is a non-digestible food ingredients that settles in one’s gut and helps in the secretion of beneficial bacteria or bifidobacteria. The said form of ingredient benefits kids for proper absorption of nutrients and maintaining flourishing gut flora. Probiotics (Lactobacillus) or (Saccharomyces Boulardi) and Prebiotics (GOS) are interdependent, hence one cannot totally exclude the other. The former is a group of bacteria while the latter acts as a probable food for the good bacterial class. The said relation is expressed in the most common terminology, however, chemically the functioning is complex. Furthermore, GOS has been covertly used as a sweetener for basic milk items such as raw milk or infant nutrition. It allows for better mix and shelf stability while simultaneously reducing the overall lactose protein.
The general sentience for incorporating a healthy diet while managing basic aspects of nutrition along with regulatory nods from FDA and ESFA are some of the drivers for the Galacto-Oligosaccharides Industry for the projected period of 2022-2027. 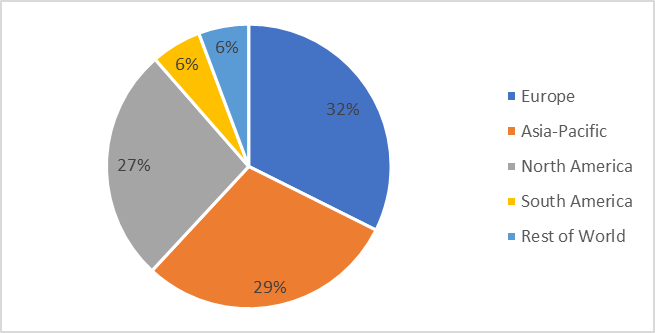 The Galacto-Oligosaccharides Market based on the form can be further segmented into powder and syrup. Syrup held a dominant market share in the year 2021. The said reason is owing to the rampant use of GOS syrup as a sweetener in cooking as well as to reduce the total lactose and sugar levels in naturally occurring milk products. Additionally, GOS is incorporated in products with ease owing to its excellent shelf stability and no hindrances with the chemical properties of the beverage concerned. Consumers have been focusing on their digestive health, which includes, and is not limited to, managing lactose intolerance-optimizing fiber intakes-weight management, and overall sugar and carbohydrate reduction. As per an IFIC survey, “limiting sugar and carbohydrate intake” has topped the list in dietary changes and adoption with a 79% rating. Moreover, the syrup segment is estimated to be the fastest-growing, with a CAGR of 6.5% over the forecast period of 2022-2027. A recent nod from ESFA to adopt GOS in food applications and beverages comes as a ready move for the said form. Additionally, as per a testimonial of a company’s marketing manager, including GOS in products gives multiple benefits to multiple parties in the trade concerned. As listed above concerns, dairy producers would incur utmost difficulty to incorporate all the requirements while maintaining profitability and quality. With GOS syrups, neither of them would be affected.

The galacto-oligosaccharides market based on the application can be further segmented into Food and Beverages, Dietary Supplements, and Others. Dietary Supplements held a dominant market share in the year 2021. One of the primary reasons for the same is a heightened consumption of infant formula, which has been considered as an alternative to breast milk. As GOS helps in the growth of intestinal bifidobacteria, it is extremely useful and an important nutrient intake for infants. In vitro studies revealed that 4.4% growth in levels of good bacteria was observed post-consumption of GOS. Further consumption increased the levels by another 2%. Moreover, it increases the bowel frequency amongst infants. However, Food and Beverages segment is estimated to be the fastest-growing, with a CAGR of 7.2% over the forecast period of 2022-2027. It owes to the rising adoption of dietary fiber in one’s daily diet plan. FDA recently gave a nod which allows the food manufacturers to allow and count eight types of fibers while giving out the “total fiber content” on their “Nutritional Facts Label.” It also includes the likes of galacto-oligosaccharides. Due to the fiber, stability to maintain the prebiotic levels post-mix, and its heat and acid resistance in the enlisted beverage will allow the market to grow forward.

The galacto-oligosaccharides market based on Geography can be further segmented into North America, Europe, Asia-Pacific, South America, and Rest of the World. Europe held a dominant market share of 32% in the year 2021. Europe has been a leading exporter of infant formula to the world. Bobbie for example has been a European-style formula with FDA approval in which the demand significantly outpaced the supply. Additionally, many US parents consider European infant formulas to be of higher standards than those within their country. Furthermore, a survey from a New York City Pediatric Practice of 552 parents revealed that German Brands such as HiPP and Holle were more trustworthy than any other brand. The said survey was based on a ranking of one to five. Furthermore, brands within Europe have placed limits on corn-syrup usage while placing extreme vigil on the usage of pasture-raised cow’s milk. However, in the U.S. companies are allowed to form carbohydrates by using 100% corn syrup-which is extremely unhealthy. However, Asia-Pacific is expected to offer lucrative growth opportunities over the forecast period of 2022-2027. The functionality, stability, and storage capacities of the product will enable its use in making beverages, confectionaries, and other bakery products. The Asia-pacific geriatric population is growing at a tenuous rate, and the use of probiotics such as these could greatly help in the adoption of this ingredient.

The growing geriatric population bases supplemented by gastrointestinal problems and anxiety worries have led to a robust use of galacto-oligosaccharides.

Studies after studies have reported that gastrointestinal issues start to take shape as and when one starts to age. The problems can be related to gut health, digestion, and various other microbial anomalies. Research conducted by NCBI suggests that GOS helps in developing bifidobacterial- a good bacterial microbe that can help in providing exceptional gastrointestinal health like reducing the occurrence of constipation, bloating flatulence, abdominal pains, and others. Research conducted at the University of Surrey revealed that by providing GOS to healthy and adult populations, the anxiety levels can be bought down significantly. For the said conclusion, a study was conducted on 64 healthy people and double binds basis was kept evaluating results. Furthermore, the senior population is growing at a significant pace since the baby boomers of the 1960s have started to age. Additionally, a report from CDC suggests that by 2036, both North America and Asia will have an approximate weightage of 25% for their elder population. Lastly, the EUROSTAT report suggests that the older population’s growth will be extremely robust as the overall healthcare infrastructure has improved and people have become conscious of what they consume. Owing to such reasons, the market is positioned favorably.

The adoption of galacto-oligosaccharides within the beverages segment will augment the growth of the market.

Galacto-Oligosaccharides are predominantly used in infant formula to subjugate and replicate the nutritional value of the gold standard -> breast milk. Lately, beverage makers have started to incorporate GOC as an essential fiber in their products. The said launches started to take place when various surveys indicated that consumer intake of dietary fibers has been declining. As per UK's National Diet and Nutrition Survey, that fiber intake of 30g/ day is not met by most of the adults, and if the diets have to reach, it only is achieved by adding at least 12g/ day by beverage change or dietary supplementation. Furthermore, research revealed that generally low awareness of fiber sources existed in the European countries and the survey also revealed that only brown foods contain fibers or fruits. Moreover, highlighting the content along with promoting the ingredient has the potential to prompt more purchases. Further adoptions have been made which has now allowed that fiber content is equivocally visible on products which in turn are educating people who earlier had little to no idea. As per a report from Top Health Ingredients, closer association of GOS with digestive health along with heart health has now persuaded 86% of the U.S. consumers to try more beverages having high fiber values.

The reduction in the overall fertility rates has and will impede the strongest product territory.

As per World Bank reports, the overall fertility rates are declining over the world. The said point can be ascertained with the declining population ages between 0-14. For example, in 2000, the total percentage of children between 0-14 years comprised of 30% of the total population. The said proportion touched 27.01 in 2010 and now has further declined to touch 25.482 in 2020. In 2017, for the least developed nations, the average child per woman was 4.03, which has stepped down to 3.87 in 2020. The less developed countries have seen a reduction from 2.60 children per woman in 2017 to 2.40 in 2020. The following have been a prime reason for the global average to low down, as for 2017, the average child per woman was 2.47, which is now 2.35. It is primarily associated with the rise in girl education and mother education for halving a nuclear and small family. Hence, the market growth will be stinted.

Product launches, mergers and acquisitions, joint ventures, and geographical expansions are key strategies adopted by players in the Galacto-Oligosaccharides Market. The top 10 Galacto-oligosaccharides market companies include: